Every winter 3-5 people die in avalanches in Norway. Mostly the avalanches are started by the victims themselves. Following some simple rules could reduce the chance of being caught in an avalanche for all those who travels in the mountains during the winter.

Be extra cautious when:

How steep must the slope be for an avalanche to occur? 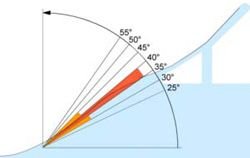 If you avoid slopes like these you will most likely not be victim of an avalanche even if it is said to be a high risk avalanche area.

Holmenkollen ski jump arena as a measure for slope angle.

The red sone is where most avalanches occur. Between 35 to 40 degree slope.

Use of ski poles to measure slope angle.

Has it recently been strong winds? 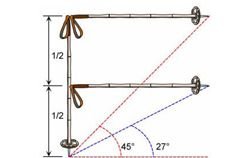 Most avalanches occur during or right after heavy snow falls and strong wind.

Leeward slopes are most prone to be avalanche areas.

50 centimetre snow during the last couple of days usually increase chances of avalanches.

Contrary to what may people believe the chances for an avalanche is higher in cold weather than in warmer weather (wet and warm snow) in spring.

Are there visible signs suggesting risk of an avalanche?

Observation of recent avalanches shows a high risk of avalanches to occur.

Rumbling sounds from the snow is also a warning.

Hearing such sound you should not go into the area even in the bottom of the slope as the “cracks” in the snow can move upwards the slope setting of an avalanche.

Everyone who travels in avalanche areas should carry with them some safety equipment, and be trained in the use of it.

The most important gear is an avalanche beacon, search probe and a good quality snow shovel (some shovels actually have a probe inside the shaft).

This information is shamelessly nicked (translated and rewritten) from a NGI (Norwegian Geological Institute) web site.