When you need to be sharp

One could easily make a bow saw if you have a saw blade. I sometimes carry one in a tobacco tin.

One could also carry one behind ones belt. Fastened With to small Chicago bolts or a long strip of duct tape.

Cut a suitable sapling, saw a inch long cut Down the middle of each end.

I have two bolts With nuts in my tin, but you could also use rope or wooden pegs. Put them trough the holes in the saw blade, and bend the sapling in an U-shape. Heat from a fire will help you bend the Wood if you have a fire.

You could also make a little more sturdy bow saw with your saw blade.

The pictures below should be self explaining.

Some notes on making this saw.

This saw could be tricky to get "balanced". It is very easy to get a somewhat wobly saw that doesnt work well.

I`ve countered this With an extra support stick, making the stretcher piece an V shape.

One could also use Nails trough the handle sticks into the support stick if you have them.

A better way is to make real carpentry joints.

Cut a stip of birchbark close to the widt of your blade.

The strip should be 4 times the lenght of your blade.

Trim off any imperfections with a knife or sand paper/rasp (above right).

Then cut a narrow strip of birch bark (long). This is your weave.

Bend the widest strip like shown on photo below left. Then make a bend in your narrow strip and slide it in between the side of the sheath inner.

Then begin "weaving" the strip upwards. One round inside, and one round outside, until you have reached the top. Thuck the end of the narrow strip where it fits.

If you run out of the narrow strip, just skive the end of a new one and thuck it inside, continuing your weave.

When finished, trim of the protruding ends and try it.

Such a sheath could be used for all sorts of pointy or sharp tools. Like scissors, 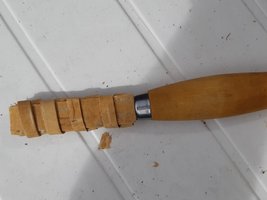 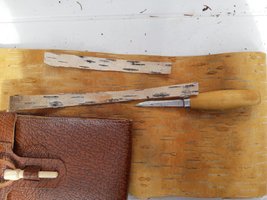 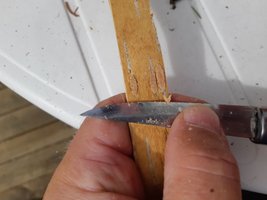 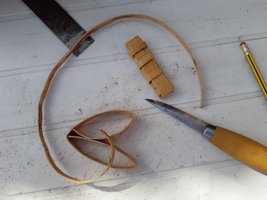 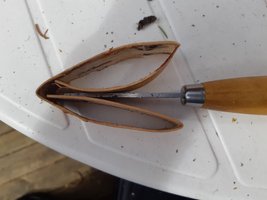 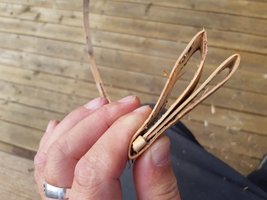 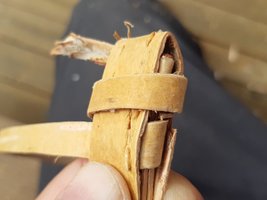