Hunting and trapping is heavily regulated in Norway. Some of the traps and methods I mention in the below text is also illegal to use.

Check the law before you hunt or trap.

The forests of the north aren’t actually crawling with wild animals. And only a few of them are suited as food. 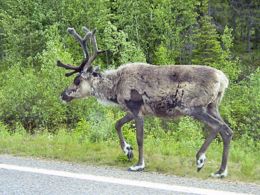 The best known of the northern animals is probably the reindeer (Rangifer tarandus) (picture right).

All reindeers in the north of Norway are semi-domesticated and thus someone’s (a saami) property.

In an emergency though one must take what one get and the reindeer is fairly easy to hunt as they are accustomed to people. One could easily get close enough to use a spear or a bow and arrow.

Moose (Alces alces) (Picture right) is another of the big animals in the northern forests. These are large and fast moving and unless you have a suitable weapon, they are best let alone.

In earlier times both reindeers and moose was harvested in large pit traps.

The pits were over 2 meters deep and 4-6 meters in diameters at ground level.

The pits were lined with timber or rocks. Between these traps there could be hundreds of meters with fences, either made of rock or wood, to lead the animals in to the pits. 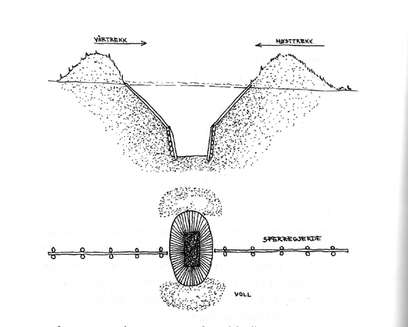 These traps were placed along the animals migration routes.

A great deal of work was involved both to build and maintain these structures and cover them to hide the hole.

The amount of meat from the moose made the effort worth while though. These structures were in use until the 17th century some places.

Below is picture of a moose track and a tree the moose have eaten the bark of. One feature of the track is the two small "toe" marks on the prints backside.

More pictures containing signs of a moose in the area. The first on is a "brunstgrop". A place were bull moose urinate and roll themselves to attract the cows. The other picture is a "bed" where the moose have lied down for the night.

As said earlier if you don`t have a fire arm it is little use in hunting the moose although it could be done.

With a suitable fire arm it is not too difficult.

Find an area where the moose feed (in the morning and/or the evening) or its route to the feeding ground.

This route could be found on basis of the tracks the moose leave. You will know you have found a moose path when you see it.

The feeding ground could be found in the following manner.

Try finding a good lookout point on one side of a valley or a hill and search for “black” moving spots against the brown or yellow background on the other valley side.

You will be amazed to see how easy the moose is spotted.

It is almost unbelivable how many you can see as you almost never see them just walking trough the woods on a hiking or fishing trip.

A pair of binoculars greatly improves your ability to spot the moose.

Best time of day to spot them are in the morning and in the afternoon.

They usually rest in the middle of the day.

Find a spot nearby their feeding ground or their route towards it, where you are somewhat camuflaged and can take a clear shot. Remember to check wind direction and sit still

(And I mean sit still. It is unbelivable how many people who are unable to do this easy task).

When you have spotted a moose you could also begin stalking it.

If you take your time, keep quiet, and keep track of the wind direction (go against the wind),it is possible to get within bow range of the moose.

The moose have good hearing and a good sence of smell, but not so good eyesight (they will see you moving though).

Wind and a little rain are good hunting weather. Such weather mask the sound of your footsteps a little.

If you are several people the moose could be driven out of an area towards pre planned manned “posts” or a line of shooters in other words.

This needs a little planning, but the wind direction is of less importance when driving animals.

Knowlegde of the terrain is the key to this form of hunting.

If you hunt in an unfamiliar terrain it is wise to study the map.

Find out where the moose is likely to go if frightened, and place your shooters along those routes.

I`ve hunted unfamiliar terrain many times and a qualified guess often give results.

Of course the moose could run on an alternative route where you didn`t have a shooter, but if unfamiliar with the terrain it is a matter of trying and failing.

You could always try another day.

The area driven should not be too big.

Distanse between the shooters should be about 150 meters (terrain dependant).

The shooters should be quiet and sit still, but could have a fire lit if they want.

Smoke doesn`t seem to affect the moose in Norway.

They smell it all the time anyway (smoke from wood stoves).

The beaters should not be too far between, and preferably move in a line (it doesn`t matter if they speak or make a little noise).

If the beaters are too eager or brisk the moose will have too much speed towards the shooters.

If they are too slow or undecisive the moose could round them and dissapear in the opposite direction of the drive.

The beaters should not make too much noise either.

A real life example from a moose drive.

The hare is found almost everywhere in the northern forests. This is a more managle animal of about 50- 60 cm length.

The hare is brown/grey in summer and white in winter.

Trapping them in winter is most usual. Then one can easily spot the paths of the animal and set a snare across it.

Fasten the snare to the stick (preferably with a small piece of string).

Don’t fasten the wire directly to the stick, the hare may breake it.

Most usual snare material is 1 mm brass wire, but other types of wire or string could be used.

The snare loop is typical about 25-30 cm in diameter.

Another support stick is set on the other side of the track.

Cut a notch in the bark to hold the snare in position. 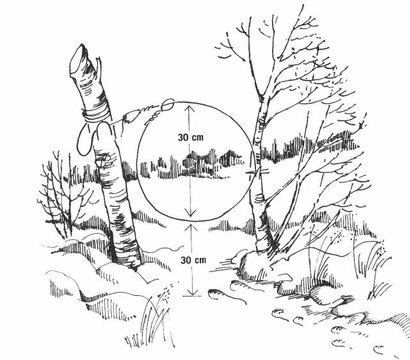 The snare should be set on a place were the hare has good speed. Preferably on a fairly open spot. The hare is very cautious.

I’ve heard that the hare is almost impossible to catch in brass snares in moonlight because they see the moonlight reflexing from the brass wire.

This little animal is found in most part of the northern coniferous forrest.

They are easy to get close to and are very noisy for their size, about 30-50 centimetres. Half of this length is the tail.

They could be killed with a sling shot, bow and arrow or with a trap.

The easiest trap for these animals are the squirrel pole (below right).

In an area with squirrels just lean a long pole against a tree and attach some snare to it. The squirrels are like most people, lazy, and use every short cut they can find.

Another more common trap in Norway is made of two half slabs of spruce or pine.

Sometimes the lowest slab was equipped with 4 thin twigs set in bored holes.

The top slab was notched so the slab ran free between the twigs.

The trap was most often set in head height up in a tree.

Then it was both easy to set and out of snow.

A figure four trigger was used to set the trap.

Dried mushroom was used as bait.

Even if you don’t see the animal there might be signs that shows that they are in the area.

There are lots of different birds in northern Norway during the summer months. Most of these migrate south in fall though.

But some species live here all the year and some individuals of the migrating kind choose to stay here during the winter.

Allthough there are lot of different speices of bird only a few is hunted.

The usual game birds in the north are the Grouse (Lagopus muta, Lagopus lagopus), very popular game bird, Black grouse (Tetrao tetrix), also popular, ducks (Anas platyrhynchos,Anas crecca, Mergus merganser etc), not hunted as much as they could be, and the goose (Anser anser,Anser brachyrhynchus) is almost migrated before the hunt begins.

Other birds may be hunted but not in very great numbers.

The most popular game bird in Norway.

The bird is found all over the north, but in recent years it has been a decline in the population.

This is the only bird that can be legally caught in snares as far as I know, but only in a few municipalities.

The snare is only used in late winter.

First the grouse is located.

No use to set the snares if the grouse don’t use the area.

Tracks around a small birch shrub are excellent.

Cut several birch branches (not from where you will place the snares), and use it to make a small fence (snares could also be placed in natural runs).

The snare is then placed in openings in this fence. The snare should be about 4 fingers (about 10cm) above the ground.

A small “boquet” of birch twigs with lots of shoots and catkins could be set on either side of the snare as bait.

In Norway there are several trushes used as food in earlier time.

They were snared in great numbers and usually sold to restaurants.

Nowadays I don`t think anyone bothers to hunt/snare thrushes.

They where mostly caught in a trap called a “done”.

A Y-shaped branch was braided into a triangle and a snare was mounted inside (sometimes even two snares was used).

The trap was then baited with Rowan berries and hung up in a suitable tree.

Best time of year for this was in fall when most berries in the woods was already eaten and the ground was snow covered.

As with all snares and traps, the more of them you set, the more you are likely going to catch something.

You can not set too many traps or snares.

The snare loop was about 3-4 fingers wide and placed about 3 fingers above the Rowan berries.

Any thin string could be used as snare (eg fishing line), but traditionally they used hair from a horse tail.

Preferably from a stallion as the mare pee in their tail making the hair brittle.

Another snare for trushes (and other small birds) was/is used farther south in Europe (I don`t know if this trap has ever been used in Norway).

It is basically the same trap as the American Ojibwe pole trap.

A sapling is cut and a hole drilled in the fat end. A string is tied in the thinnest end, going trough the hole in the fat end and ends in a snare loop.

A knot is tied on the string between the snare loop and hole (do this when the sapling is drawn up like a bow to get the length right).

You will also need a “trigger” stick wich matches the size of the hole. 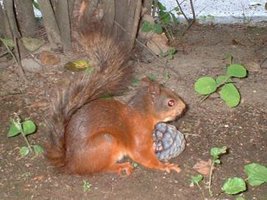 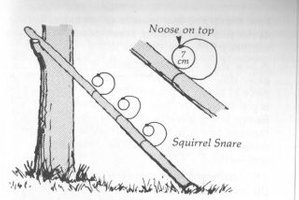 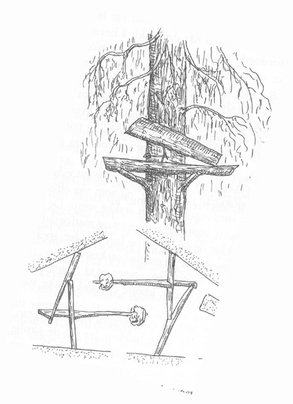 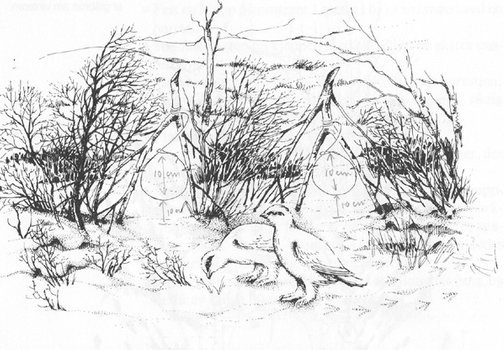 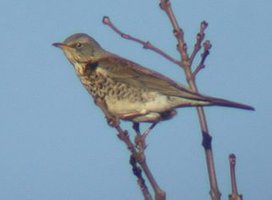 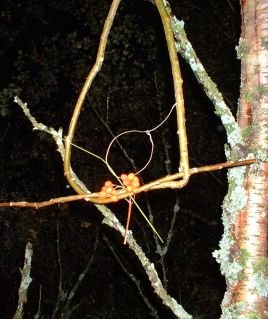