A home in the cold

Most people I know use a tent as shelter in wintertime.

But suppose you didn`t have one.

Winter shelters do not have to be time consuming or difficult to build.

Some times it is enough to dig down in the snow, making a snow trench or digging into the snow to make a sort of "lean to", like the one on the photo below.

The one on the photo above was just used for a quick coffee brewing stop. If I was going to spend the night I would have used branches from two downed pines lying just behind the shelter as extra insulation for the bed, and stretched the tarp I had in my rucksack over the bed area to ward off drifting snow and as a heat reflector. The "hole" was dug out in about 15 minutes.  The adding of extra bedding material and tarp would add 30 minutes to the construction time I guess. A nice "warm" shelter built in no time.

If I didn’t have a sleeping bag I would have used a log fire for warmth during the night.

The snow hut can be made in two ways.

The first and easiest is to just make a pile of snow, make sure it is compact. Let it freeze and harden for some ours and then hollow it out. To make sure the dome walls have an even thickness one may stick small twigs of even length trough the pile. When you meet these you stop digging.

This kind of hut was used by Indians in Alaska and Canada and is called a Quinchee. Don`t make the shelter bigger than necessary. 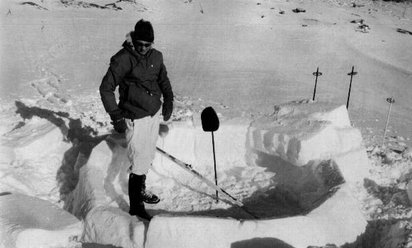 The other way to make an igloo is a little bit more complicated. First mark a circle as wide as you want the hut.

Cut blocks of snow, the snow must be compact, cut from a snowdrift, and lay them in a circle (see picture above).

Shape the blocks to a spiral and lay down next layer and so on. The last blocks may need a little support as you fit them in position.

Cut an entrance trough the blocks or dig one beneath them. The sleeping level should be higher than the entrance to create a cold level you can use for storage etc. Use a candle for lighting and warmth.

Remember to make a small air hole in the roof.

These shelters are however not something you would build as a long term shelter along the coastline. The weather is much too unpredictable for that.