If you really want to go wild

Natural shelters are not very common, but sometimes you could find usable shelter.

Caves and overhangs (if they`re dry), between rocks, snow banks (dig into it), under downed trees, sand burrow, hole in snow around tree trunk.

The shelter doesn`t have to be much to look at, just a place to keep you safe from the weather.

If you plan to stay, one may improve the shelter day by day.

The picture left shows a shelter under a large Spruce.

A plastic tarp gives additional protection from the wind and acts as a reflective wall.

The wall could be built With spruce branches if one don`t have a tarp.

The temperature when this photo was taken was about -10 degrees Celsius.

The spruce gives protection from snow/rain and also minimize Convection of heat to the air.

A natural shelter could be something like the downed tree beneath.

I`ve put down 2 logs just to show how one could easily make a bed.

Two more logs and some branches from a spruce, juniper or pine on top of them, and the bed is finished.

If one have a tarp that could be used to improve the roof.

This shelter was fortunately facing the right way, away from the prevailing wind.

Downed trees can fall into place and kill or injure people under the root.

Use your head, aka common sence out in the wilderness.

The downed treebelow is also an option for shelter.

The shelter could be made with the aft tree as base and the sandy ground left open by the tree in the foreground could be used as bed for the fire.

Then you don`t have to dig down to the sand. On mossy/peaty ground it is not a good thing to light a fire.

When I was a boy my buddies and I made a shelter under a large rock.

Walls were made of stones and cracks sealed with moss.

The floor was covered with birch branches and ferns.

We stayed under that rock for 4 days while fishing in a nearby lake, and it was quite comfy.

The shelter was still usable many years later when my uncle and me used it under a hunting trip. 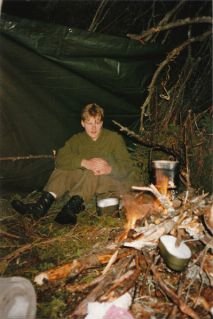 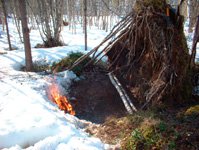 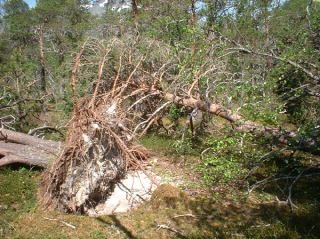