The common long-term shelter of the north is a “gamme”.

It is a saami sod house made with a wooden frame covered with lots of debarked poles, birch bark shingles and peat/turf.

It takes some time and a lot of resources to build.

But once built it stands for about 30 years. Right is a drawing of how the "gamme" could be constructed. There are some variations, as you could see from photoes on this page.

The frame is made of 2 "half circles" with a "roof beam" between them.

The two "half circles" are usually made of mountain birch which often is very crooked and thus have the right shape.

Some horisontal branches are pegged in place (wooden pegs) and the whole construction is covered with poles, birch bark and peat/turf.

Below is a picture of how the frame is joined together.

There are two types of gamme. The oldest types have a smoke opening in the roof and are heated with a fireplace in the middle of the floor.

The more modern type has an oven installed.

Gamme have been used as housing for both people and animals in centuries.

The one at the picture below is the normal size found today but earlier they could be 4-5 times as big.

The smaller sod house below is probably used by hunters. It is room for two people and their equipment.

There are several of these shelters scattered around the forests and mountains of northern norway.

Many of them are marked on the map (N50 maps), and they are open, offering shelter to anyone passing by.

At the right picture below you could see the "kitchen area" in form of a wooden "table". 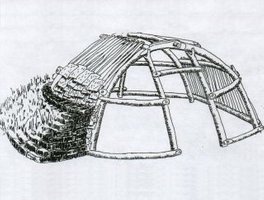 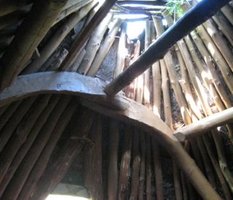 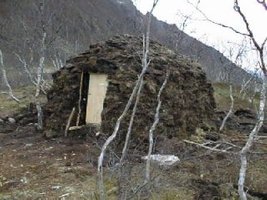 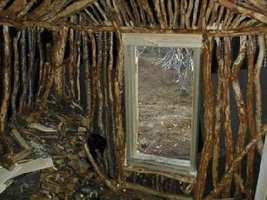 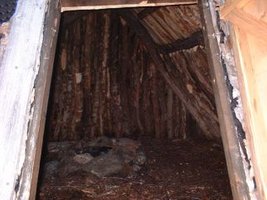 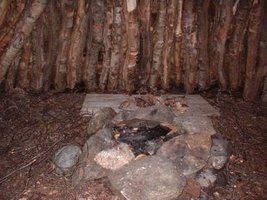 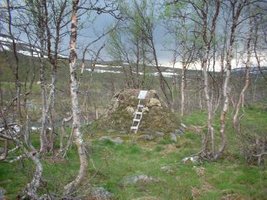 When you wont go home