A small knife is useful in many situations. Also were one would believe that an axe or big knife is needed.

Below is a series of chores one could do with a small knife (and also bigger knives). 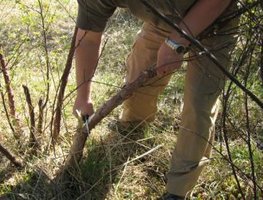 Even though you don’t have a big knife you could cut down smaller trees.

Instead of chopping it down you use the sharpness of your knife to cut it down.

If you can bend the tree you can cut it.

Bend the tree against you and begin the cut were the tree arcs the most.

This is the place the wood fibers are under the greatest strain.

Continue to bend the tree and wiggle the knife a bit to slice trough. 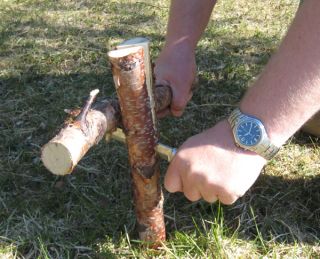 Batoning is splitting wood lengthwise without an axe.

You use a baton (any piece of wood) to drive your knife trough a length of wood.

One could easily split much thicker logs than the one on the above picture.

But remember that the blade have to be longer than the wood is wide.

You have to have a length of blade to use the baton on.

It is a neat way to get to the dry core of a log, for kindling, after long periods of rain, or if you just want smaller pieces of wood.

Not all small knives are strong enough for batoning.

Think about it before you bash away on your favorite scandi.

A way to split heavier logs is to use wedges, which you make with your small knife.

Make wedges of any wood and use the baton on these.

Move the wedges as the split gets wider.

Make to incisions on each side of the arrow shaft where you want it to end. Make to more cuts perpendicular to the first cuts about 2-3 centimeters from the other cuts.

Now you bend (slowly) the wood as to split it on each side down to the lower cuts. When the wood is split, the wood is bend perpendicular to the way you bend it first, but now you could use some force, breaking the end of.

You should know end up with a nice nock.

This was a thing we made every spring as kids.

And I still do it, mostly to keep the skill alive or teach some kids to do it themselves.

The whistles are made of rowan or willow.

When the sap flows and the bark can be peeled easily one can make a whistle.

Find a straight piece of wood, about 10-15 cm long and the thickness of your index finger.

First square off the mouth piece end of the whistle

Cut trough the bark all the way around the stick about 6-10 cm from the end.

Moisten the bark in your mouth and gently tap it with the handle of your knife (sometimes you can skip this step).

My father said a rhyme while tapping the bark with the knife handle, but I don’t remember it.

Anyway, that is not important for the result.

Hold the stick in your hand and twist the bark off.

It should come of easily and in one piece.

The mouth piece end of the stick is carved and broken off, and a flat air channel carved out.

Put this piece in to the bark tube again and blow it using your finger to close the bottom of the pipe.

If you get sound, mission accomplished, if not more carving is needed.

The trick is to get the air to hit the edge of the bark notch.

Lastly the stick is cut down to size and the bark put on.

Your whistle is ready for use. 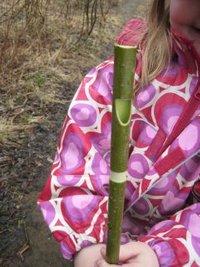 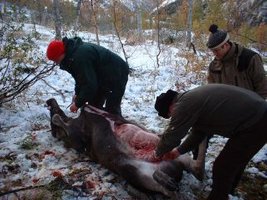 I many times wonder why some people tend to believe that the bigger the animal the bigger your butcher knife needs to be.

I use the same knife on everything from small fish to moose.

When hunting moose we all use small knives when skinning and butchering.

All of the Scandinavian type; Mora No.1, Helle Hunter, Helle Skarping, Mora 2000 and so on.

No need to use big knives or saws.

Earlier people managed with a small piece of flint. 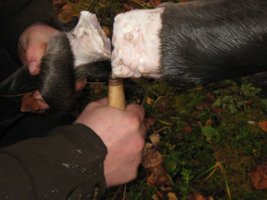 Skinning is mostly done with your hands and fists anyway.

You just cut when it is difficult to remove the hide by hand, and the bigger the knife the less control you have over the cut.

When skinning old moose oxens you tend to use your knife a lot.

It is more tiresome for your hand to use a large knife than a small one.

After skinning the moose is cut in more managable pieces trough the joints.

This could easily be done with a small knife.

By all means use an axe or a saw if you have one. But you don`t need them.

If your knife doesn`t have a gut hook, don`t dispear. Your index finger covering your knife point (pic below) is all that is needed.

You could also use both hands; keeping the blade between your left hand (if youre right handed) index and middle finger as you cut trough the flesh.