What you wear in the woods

You don’t really need a large wardrobe of fancy Gore-tex jackets, trousers and boots to enjoy the outdoors.

When I was a kid we mostly used high rubber boots (wellies), jeans and cotton anoraks, or old army jackets.

Of course we had the traditional knitted woolen socks, sweaters, long johns and knitted caps as well, but special hiking or outdoor clothes were rare.

When it rained we were wet, in winter we was often cold, but we was mostly outdoors, unlike today’s kids with all their fancy Gore-tex clothes.

That said I highly recommend Gore-tex clothing. It is perfect for our rainy environment, but you don’t need it. A good raingear or a poncho will also do. 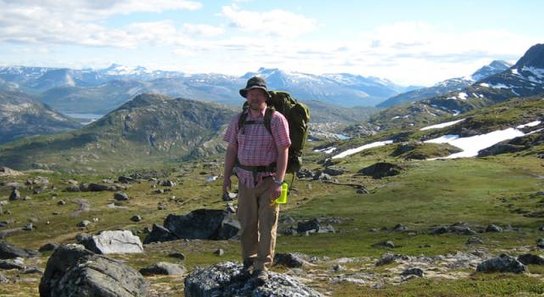 When I’m out in summer I mostly use a T-shirt/cotton shirt (Depends on weather and length of trip), a cotton boxer underneath a cotton/polyester mix trousers and a surplus German flecktarn Gore-tex jacket (matching the trousers mentioned below).

While I use a variety of different trousers I mostly use the Fjellreven Iceland trousers in G1000 fabric.

These trousers are light, dries fast when wet and look to be very though.

It is supposed to be waterproofed with beeswax/paraffin wax, but I haven’t bothered to do it after I washed them last time. 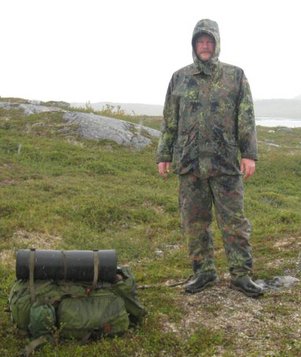 I have some surplus German flecktarn Gore-tex trousers which I got very cheap.

These are light and watertight and have found their way into my rucksack for really wet weather use (spring and autumn) and also as a wind breaker in winter.

I just wear them outside my other trousers.

The trousers are fitted with suspenders and long zips on the sides to take them on while wearing your boots.

It is light, windproof and waterproof. When not needed it is rolled together and stashed away in my rucksack.

I like the jacket to have a fixed hood.

I feel it isn’t a real jacket if it hasn’t got a fixed hood.

I want that extra protection a hood gives against the wind, rain and snow.

The T-shirt is swapped for a woolen undershirt if the trip is more than just an overnighter or if it is not sunny.

On my feet I mostly wear thick knitted woolen socks only. 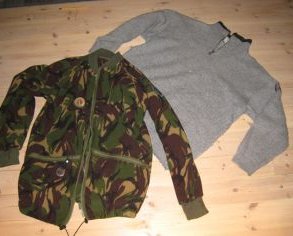 I also have with me a woolen sweater or a fleece jacket in my bag as a mid layer.

These are stowed away in my rucksack and taken out if needed.

I don’t use the mid layer when walking longer walks.

The woolen undershirt is sufficient, even in winter.

Spare socks (wool) and extra underwear is always nice to have in the rucksack.

On my head I have (mostly) a cotton hat or a baseball style cap (wool or Cotton).

The hat has an integrated mosquito net. 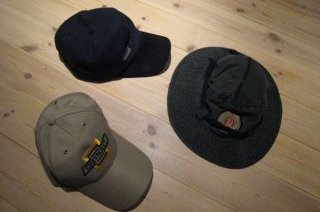 Not that I use the mozzie net a lot, but it is nice to have when one is working and the mosquitoes are very disturbing.

I have waterproofed the hat with a beeswax/paraffin wax mix (1 part beeswax and 9 parts paraffin wax).

The mix is rubbed in and melted into the fibers with a hair dryer. This works very good. 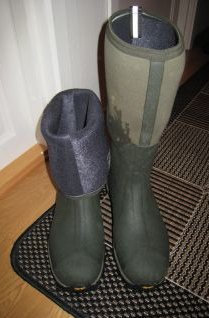 On my feet I wear a variety of training shoes/sandals if the weather is warm and a pair of neoprene boots (Grub`s extreme) if it isn’t so nice weather or the trek goes trough marshy areas.

They are lightweight and rugged.

The boots cannot be compared to the old rubber wellies of my childhood.

You will sweat in the Grub`s boots too, but no way near the old wellies and besides it is no problem taking them off in the end of the day.

The old rubber boots kind of sucked itself to the foot, making them almost impossible to take off without ripping some muscles.

The Grub`s boots have a thick vibram sole which offers good traction.

The support of the ankle is no way near that offered by a leather boot, but I don’t have a problem with it.

Besides I’ve seen people sprain their ankles in the sturdiest of leather boots.

My Grubs boots finally gave up on an trip to the Mountains in august 2014.

No other boots I`ve had has held up this long. I will not hesitate to order New ones. 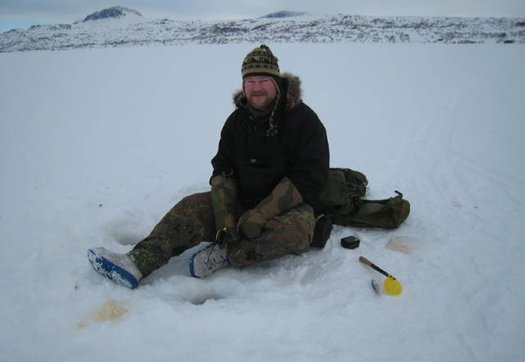 In winter almost all the cotton clothes are replaced with wool and woolen long johns, and headover (long tubular woolen scarf, like the Buff) are added.

One cotton item I still in use in winter though, and that is the anorak.

I have a Fjellreven Gutulia in G1000 fabric (I`m wearing it in the picture above).

The anorak is lightweight and does "breathe" in the cold unlike various tex membrane clothing. 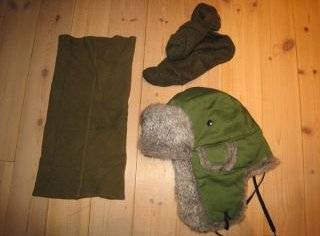 The headwear I mostly use is a knitted cap (army issue) unless it is very cold or bad weather.

When I travel higher up in the mountain or on longer trips I bring along my old fur hat (right) as well.

It is made of (cotton/polyester) and has a lining of rabbit fur.

I’ve seen hats selling for about 3 or 4 times the Money I gave for it.

But still the quality is very good.

I also have an Norwegian army offisers winter hat which I occasionally use.

It is made of wool. Very similar to the Russian Ushanka. 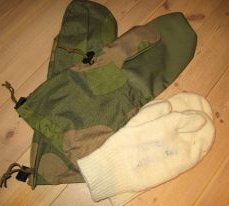 I wear woolen mittens with polyester/cotton outer layer on my hands (army issue).

I use mittens because they are superior to gloves in cold weather.

The mittens are attached to each other with a length of paracord, and a loop is made with yet another piece of paracord.

The loop goes over the head securing the mittens against blowing away if I take them off in high wind. 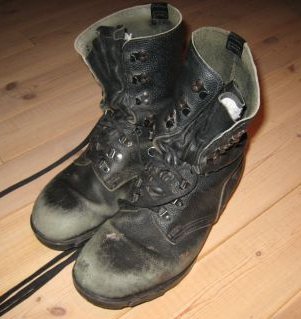 In wintertime, if the snow depth permits it, I wear my Old Norwegian army boots.

They are cheap (I got them for free from the government :)) and rugged.

They require daily maintenance though.

A good coating with kiwi shoe polish is usually enough.

You will see that the daily maintenance on my boots are somewhat lacking.

These boots also see use in summer.

I also have a pair of over boots for the army boots if it is really cold or wet winter conditions, but I seldom use them.

I mostly use a pair of Lemigo Arctic EVA boots instead.

These are very light and warm.

They don`t pack very well though. 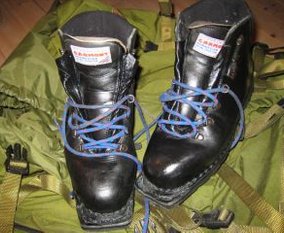 When skiing one needs ski boots (if you don`t have bindings for normal boots that is).

Together with the ski boots I use knee length cotton gaiters.

That way the boots will not be filled with snow.

The reason I use cotton gaiters is that they “breathe” better than polyester or nylon.

I had some earlier, made of water proof nylon and they made my trousers wet inside the gaiters.

Some people also use gaiters in summer to prevent dirt and debris from entering their shoes.

The Saamis use reindeer hide boots (fur out) called "skaller" in winter.

They are very good and if you can get hold of a pair you should buy them.

They will be nice on long cold winter evenings or when ice fishing.

These are also used only in dry conditions.

I don`t own any myself though as they are quite expensive and not the easiest shoes to get hold of.

These boots were traditionally used with grass (“Sennegress” Carex vesicaria or “Flaskestarr” Carex rostrata) stuffing instead of socks.

Some saamis still do, but most people use a felted inner shoe. 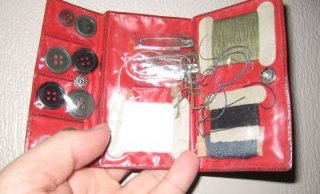 I usually carry some sewing needles, tread, buttons and safety pins with me.

I don`t use it very often, but occasionally a button fall of my shirt or a seam is broken.

I think it is nice to have some tools to mend these before they get bigger and ruin the whole garment.

The equipment don`t weigh much either.

I usually carry the small set we were equipped with in the army (above).

They are neat and don’t take up much room. Still it contains most of the things you need. 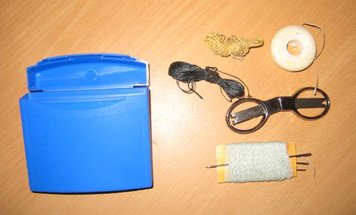 You could also make your one set using a suitable container (above).

Just make sure it has what you need and that the size is so small that you actually bother taking it with you.

Below is a pair of wool socks which got a little longer use with mending. 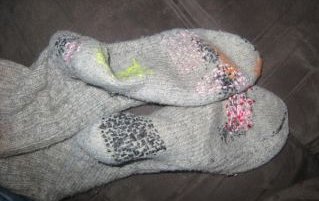