You have to do it sometimes

I use sleeping bags in wintertime, spring and fall.

In summer I mostly use a wool blanket, or a very cheap sleeping bag (from JYSK) as it is often enough.

Sleeping bags comes in a variety of brands and sorts.

I only have four and have used these for the last 10-15 years so I am no guru of sleeping bags.

I’m sure new technology has produced better sleeping bags than mine.

They are maybe old and maybe not as good as they once were, but I’m satisfied with the two I have.

Two are Ajungilac, Norwegian made sleeping bags (now a Swiss firm I think). The models are Igloo and Tyin Arctic (pictures below).

The Igloo sleeping bag I use mostly in spring and autumn. I have used it in winter too but it is a little too cold for the coldest outings (about -30 deg. Celsius).

The Tyin Arcticmodel is on the other hand a good 3 seasons bag (autumn, winter, spring), but much too warm for the summer.

Both these bags are mummy type with closure (elastic) at the neck and face. This is a must in winter bags. No cold comes in and “no” warm air leeks out.

The igloo sleeping bag has full zipper but the arctic has a zipper third its length to minimize leaking of warm air. Both bags are delivered with compression bags (also seen in pic above). These are important if you don’t want fill your rucksack with your sleeping bag.

The third bag I use is a down bag from McKinley (G-sport brand).

As most of my overnighters are in summer it is my most used bag.

It is mummy shaped with full zipper and I often use it as a blanket.

The bag was bought on sale, and is more than enough for most summer, early Autumn trips and if needed I use a silk liner With it.

If you don’t have a sleeping bag a wool blanket could be a substitute.

The wool blankets I use are old army issues. They are both cheap and rugged.

I tend to use them only in summer as they are not as warm as sleeping bags.

One could also question the use of them in summer as they are almost as heavy as my winter sleeping bags.

But I like them because they are more versatile in that one could use them as a cloak, sitting around the fire or when fishing.

Besides I like the spacious feeling lying under a blanket.

If you tend to itch when wearing wool, you will find spending a night under one of these intersting.

I’ve not tried a lot of sleeping mats. I’m fairly conservative, and I tend to use the things I know works.

That is one of the reasons my closed cell foam mat from Artiach is still in use after more than 20 years of service.

Plenty thick enough to insulate me from the cold ground, at least for three of the seasons. For winter use it is a tad too thin, but I still use it.

I also have a folding mat bought on a sport outlet store. While only 1 cm thick, it works well in a hammock, or just an overnighter in the woods. It is very light.

I`ve actually bought an Expeed Down 9LW in Autumn 2014.

I did this because of a overnighter early that year when I felt the need for a little more Comfort.

Must be getting old.

The inflatable mats are somewhat expensive, and if you`re Young use the closed cell mat

After some use it seems this mat is working quite well. So well, I bought another inflatable mat.

Not the same brand (McKinley) but as thick and large as the Expeed.

It has no Down filling, but Works very well in the summer.

A poncho could also be a good makeshift sleeping mat.

Fill it with grass or ferns and button it up.

This will make a good dry bed.

Lying directly on grass or fresh ferns will make your sleeping bag or your clothes damp. 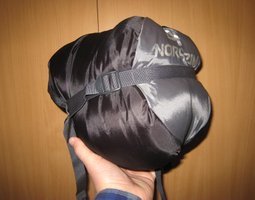 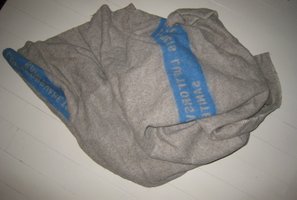 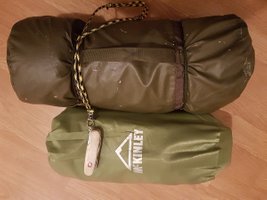