Taking care of the kill is actually the real work

The first thing you need to do when shooting a moose (or any other game) is to field dress it.

IMO (and others) it is no need to bleed the animal as the blood usually is out of the system already, or more precisely in its abdomen (not when shot in the head or abdomen, but I have never shot an animal in those places.

I aim for the lung/heart area).

If you absolutely have to stick your knife into the animal, do it in the gun shot wound.

Let the blood run out trough the cut.

Move the moose making sure it lies on its back. 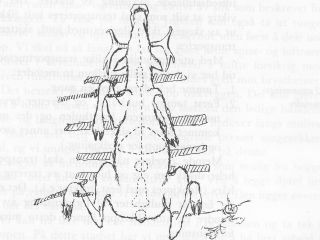 Make a cut trough the troath/neck area and free the wind pipe and gastric tube.

Tie off with a piece of string. I usually carry some pieces of string in my Pocket for this purpose. 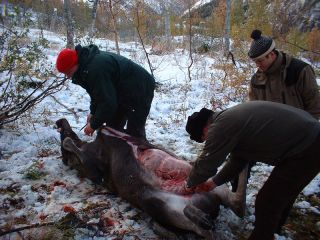 Be careful that you don`t cut trough the guts.

Use the finger as a guard against the knife point when opening the stomack. Or you could use a Wyoming tool or similar.

Then cut around the diaphragm.

Reach inside the lung area and grap the wind pipe, and drag it towards you.

Tilt the moose on its side and remove the intestines from the carcass (take out the liver and heart from the pile).

Let the animal cool off. Prop a stick between its sides to help cooling the meat a little faster. 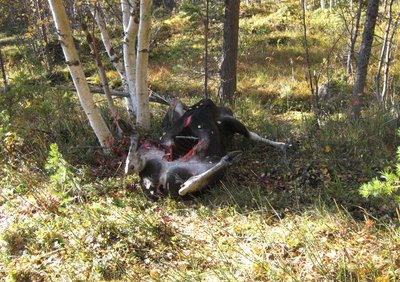 If the animal is shot in the gut and gunk is all over the inside, it is OK to use water to rinse it out, but the rule is to use as little water as possible.

Preferably use a wet, clean rag to clean the inside.

The meat is best protected when it has a dry outside.