I first spotted the moose while we where driving down towards the river on our way "home" for a meal and planning the rest of the hunting day.

We quickly assembled at the road crossing by the river and laid a hasty battle plan.

3 of us was going to form a "firing line" north of Rypdalen. The red dots shows each mans position more or less (green lines are our movements).

This was a place we used to sit as the small creek valley is free from trees and ofers free sight all the way up the creek.

I (the purple dot) was to give them half an our to get set, and then try to drive the moose bull out towards the shooters.

We knew that the terrain marked with a thick red line was virtually impassable, but one path remained and one man (the dog handler, blue dot) had to get up an plug the gap.

He went up as soon as plan was set in action. 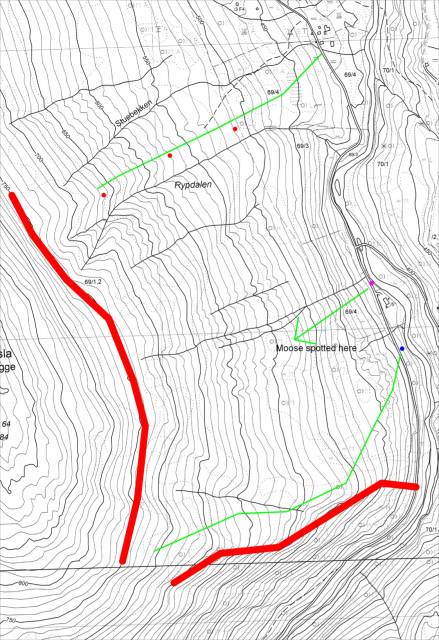 I waited about half an our and started my climb towards the moose. When I arrived at the site where I had seen him he was, as expected, gone.

As I went about trying to find his track among all the others, the dog handler reported on the radio that the moose bull was on his way down hill, against Rypdalen.

Just 5 minutes after we heard a shot.

The moose had ran straight past the lowest of the 3 firing positions (upper right red dot).

And a fine moose it was. 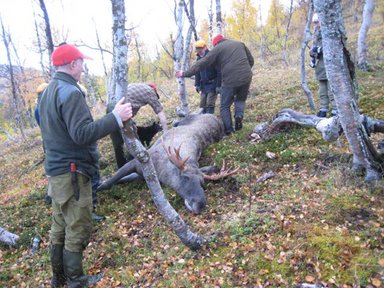 This real life hunting example shows how a little knowledge of the terrain can be used to the hunters advantage.