A versatile but expensive bit of equipment

This piece of equipment I highly recommend. I bought mine, a Jervenduk Original, in the late 90`s and it is still going strong.

I carry it with me on almost every trip to the woods or mountains, and I also use it more often than my other equipment (except my knife).

Three sides have zippers allowing you to close it or to attach it to another Jerven tarp making a really huge tarp.

The tarp is water proof and aluminium "coated" inside.

The mountain camo and forest camo is sold in most sporting goods stores.

My tarp has the old discontinued mountain camo pattern.

The tarp is very versatile.

It could be used as a wind sack, when fishing on the ice, eating your lunch, still hunting or as a quick emergency shelter.

The downside of these tarps is; as they are not breathing ala Gore-tex or similar fabrics, you have problems with condensation on the inside.

This could be solved with a heating source.

A small candle in a cooking pot inside the sack/tarp would solve the problem.

Another downside is that it is very expensive, at least for foreigners not accustomed to the Norwegian prices on gear.

One could also get larger tarps and tarps with insulation.

But one of the criterias for me was that it should not weigh too much nor take up too much space in my rucksack.

The Picture above shows my Jerven tent.

It is basically a Jerven tarp With two end pieces.

The tent has no bottom, but I don`t mind that.

Above is a Picture of the tent in a lean to configuration (left) and closed as a "normal" tent (right).

If you use walking poles you could use these as tent poles, but I use a ridgeline between two trees. 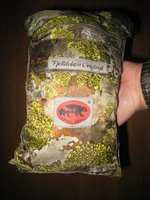 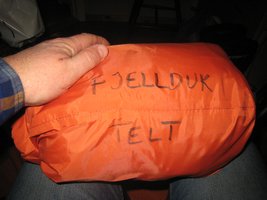